I Kid You Not

I Kid You Not is a By-Kids-For-Kids platform. Apart from our founder, most other teammates are children. 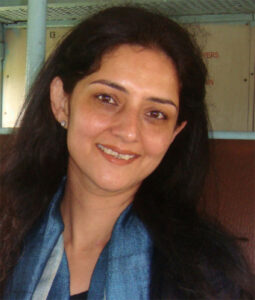 Gopika is a content and digital strategy professional who has over two decades of experience across diverse sectors in Hong Kong, the U.S., and India. She has led teams, across functions, to create content solutions and digital strategies for organizations, both at large conglomerates as well as at start-ups.

Previously she has worked for indiatimes.com in New Delhi as a multimedia content lead, and also for Time Warner in New York. More recently, she was heading content and digital strategy for First Partners, a communications agency based in Noida. She was also co-founder of Reboot – a diverse workforce participation consultancy.

Gopika has written for the op-ed section for The Times of India, International Business Times, Huffington Post, Daily O and Qiddle, to name a few. 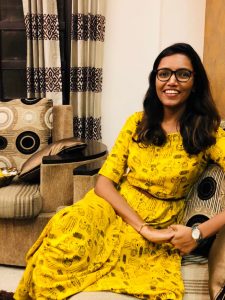 Richa had earlier worked with various Not- Profit organizations. She has rich experience in program management & implementation of projects working on women empowerment, mentoring, skill development and gender justice. She is currently a fellow of Unsound Project which talks about mental health from an intersectional and feminist perspective as she believes that mental health is as important as our physical heath.

She is a volunteer translator at Voices of Rural India – A curated digital platform for rural storytellers. Dogs are her best companions, she loves spending time with her street dogs. She believes in being compassionate towards all living beings on earth. She loves networking with people, learning new things. She hopes to make a difference in the world by her work 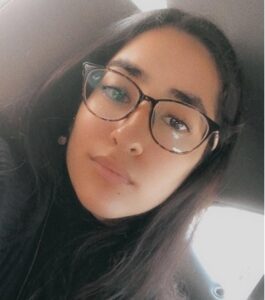 Kamakshi Anand is a grade 11 student of Modern School, Vasant Vihar. She has been writing on Instagram for 2 years (@wingedwords02) and is co-author to many anthologies. She is also a content editor of her school magazine. Besides spending hours with a pen and paper, she loves to read fiction, especially contemporary romances. Music is her happy place and nature is her muse. 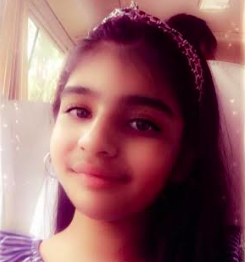 Anaisa Arora, is a student at Modern School Vasant Vihar. She is an egalitarian and a passionate conversationalist, writer and debater.

She has debated nationally as well as internationally and won many awards. She only recently participated in one of her first and toughest MUNs and nevertheless won an achievement there as well.

She has a blog on The Times of India which helps her in conveying her opinions on multiple and varied topics. One of her goals is for the GEN-Z to be more aware of the happenings of the world. She is inquisitive of everything and has an opinion on everything as well.

She is a voracious reader and loves the genre of Greek, Roman and Egyptian  mythology. Michelle Obama and Ruth Bader Ginsburg are two of her greatest influences. She advocates for intersectional justice and human rights. She  acknowledges that the future may never be perfect, utopian or flawless regardless she strives to make it so. 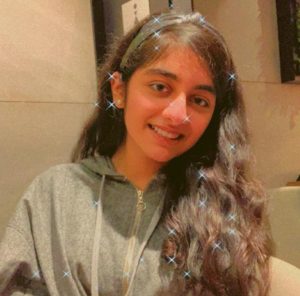 Vaania Bhagat is a grade 9 student. Since the age of 4, she has been taking part in declamations. Writing and public speaking helps her convey her opinions and views on community issues. She has blog on WIX, where she writes about issues such as feminism and child labour from a teenager’s point of view. Having previously won several MUN conferences and debates, she looks forward to sharing her thoughts with a larger audience in the future. 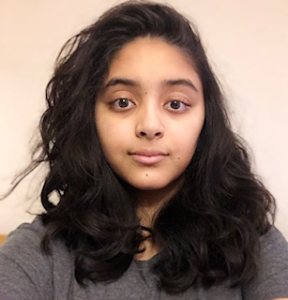 Pranavi is a 16-year-old student studying at Modern School Vasant Vihar. She has a passion for writing and photography and expresses this passion by assuming the role of editor for her school magazine. She wishes to create powerful content that makes an impact on the reader and sends a strong message. During her summer break, she participated in the journalism course at the Oxford Royale Academy summer school and was awarded an attainment prize for her work. She has also contributed to the counter speech fellowship conducted by Young Leaders for Active Citizenship in collaboration with Instagram. Her goal is to represent the demands and aspirations of the youth through her work 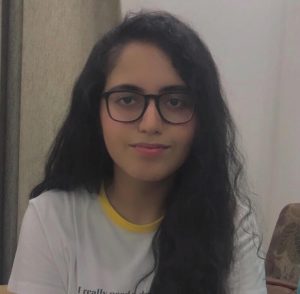 Auorra Uban is a grade 12 student standing on the threshold of entering the wide world. Her emotions have always held a prominent place in both her life and her writing. She has freelanced for the Times of India and is an editor for her school magazine. As a lover of obscure and unpopular music, you can often find her cultivating Spotify playlists with the concentration of a rocket scientist, or with her eyes glued to historical fiction books or a documentary on the world war. 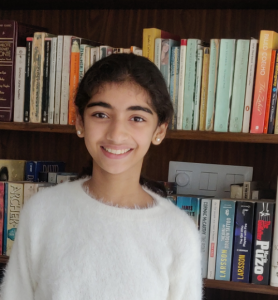 Samya is a grade 9 student. She is an avid reader and is a pianist. She has been playing the piano in her school orchestra since she was in grade 3.

She has also received awards for excellence in Mathematics and Western Music. Samya has previously won a Spell Bee competition in Junior school 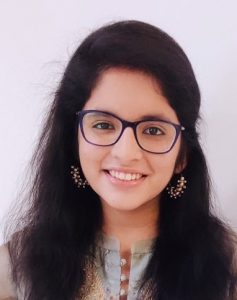 A writer and a dreamer, Aahana is a 10th-grade student studying at Step By Step School Noida. Her hobbies include sketching, playing tennis, listening to music, playing the keyboard, doing community service, travelling, and talking with friends. She has bagged many medals in multiple Olympiads and has won awards for excellence in various subjects. She grew up to be an avid reader and writer. Recently she has started writing poetry and she says she enjoys it! 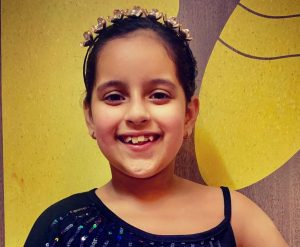 She is a child model and has been featured in several still, video, and digital shoots. She has been associated with several brands and has done ads for brands, such as, Manyavar, Ashok Leyland, Hyundai, Visa Card (with P V Sindhu), among others. As a part of still shoots, she has also been featured in newspapers and magazines promoting brands, such as, LG, Horlicks, Clove Dental, Honeywell, Dr. Lal Path Labs, Yes Bank, Max Life, Sanjivni Hospital, Little Pockets, among others. She anchored the role of a cub for a short film MAA, which was featured on Avni, the tigress, produced by WOOF YUMS.

She loves participating in dramatics and theatre workshops. Her interest to learn about new things has also ensured moving into the writing space wherein she is now involved in writing articles on conventional to non-conventional topics.

She is currently one of the lead writers for I Kid You Not and she dreams of being a good writer as it helps in learning and sharing one’s opinion with the World. She loves dancing, painting and learning, while, learning a musical instrument is next on the cards. 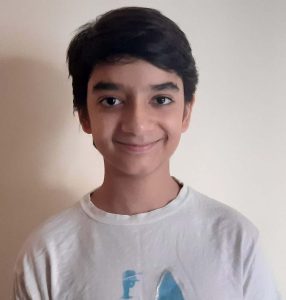 Agastya is a grade seven student who is passionate about reading and writing. He also has a blog on Medium. He also likes travelling and loves visiting new places. 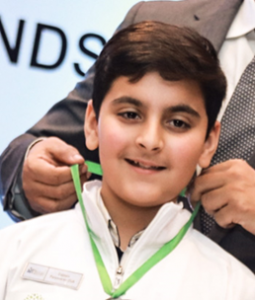 Naman Sonpar is a grade seven student in the Shriram Millenium School. He is a young environmentalist and works for an NGO called Green Dream Foundation. He has achieved third place in TOI Young Change leader contest, this competition had over 30,000 entries. He is also a confident public speaker and got awarded as the best delegate in a MUN. Naman also likes to make videos about the environment in order to spread awareness. Some of his videos are about charity as well. He is fond of writing and loves reading books by Ruskin Bond. His inspiration in the field of environment is Madhu Bhatnagar. 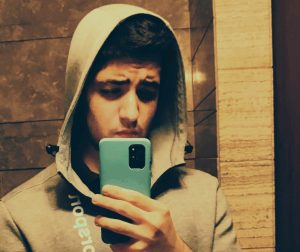 Yodhin Bali is a grade 12 student. Here’s a little about him: As a child he loved supercars – they ignited a sense of inspiration in him. He thought he’d buy one someday. Then as he grew older and entered high school he started thinking about the people behind the wheels – they were the ones who once dreamt of success, just like everyone else. But the only difference was that they were determined & wanted to turn their success into reality and not limit these to dreams – that’s only real when you’re asleep. Yodhin doesn’t want to limit his dreams to something he does when he is asleep. He wants to find numerous ways of chasing & fulfilling them until they turn into reality. And this, he says, is why e wanted to join I Kid You Not – because he wants to deliver, inspire, make another Yodhin and his friends aware of the facts of life – so they don’t just dream while they are asleep. But instead, they inspire someone who’s still asleep. He believes that I Kid You Not provides a platform that is open to all. And by all, he means all age groups – and has information on a variety of topics. By joining IKYN he also believes that he will get an opportunity to express himself and reach out to people through this platform. He wants to increase kids’ and teens’ general awareness through graphically/digitally prepared content. He also wishes to explore his area of interest i.e. Filmmaking & Editing. You can find him here: https://www.instagram.com/iam_yodhin.bali/?igshid=2p19khtqu45

Did you know that reading the news is important for a child’s cognitive development?
Sign up for our newsletter and up your child’s general awareness!

Never miss out on the news!

Did you know that reading the news is important for a child’s cognitive development?

This is why we explain news and current affairs, simply – so children find it easy to read and understand.
Sign up for our newsletter and up your child’s general awareness!